Wednesday evening in Hamburg. Did I bring the flyers?

One day before leaving for HH, I got two packages with flyers for the upcoming Arf! Arf! Arf! event in Antwerp (B).
March 21 & 22, 2014, international arts campus De Singel will be hosting a Zappa event.

a lecture by Ben Watson

concerts by
The Wrong Object
and
The Brussels Philharmonic (conductor Alexander Hanson), featuring Robert Martin as master of ceremony

I drive around Belgium to seen any of these bands in concert. Let alone the lot of them.

Capt. Cheese-Beard & The Seven Sisters Of Prevention will be performing the music of Frank Zappa. This might be one of the last opportunities to see the band performing Zappa as they are in the middle of recording an album of original material.

The Wrong Object will probably be performing a mix of original material and Zappa composed pieces. The band’s new line-up and new album promises an interesting concert.

The Brussels Philharmonic used to be called The BRTN Philharmonic Orchestra. They performed and recorded “The Purple Cucumber” Zappa-tribute in 1995.
On this occasion, the orchestra will play parts of the "200 Motels Suite" and 'G-Spot Tornado' from "The Yellow Shark". 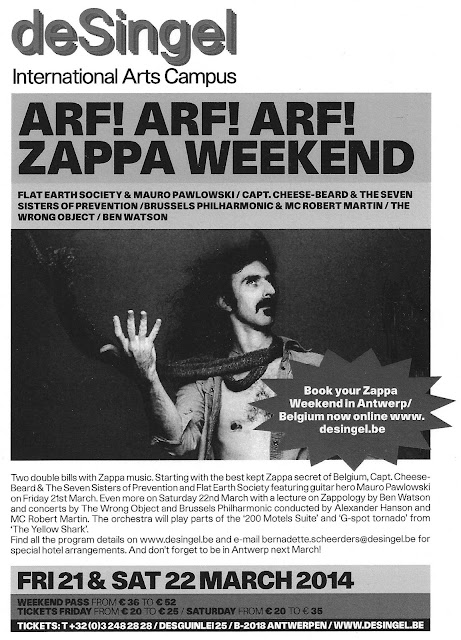