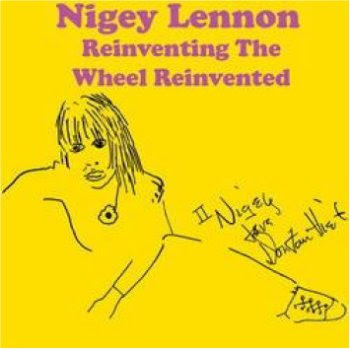 If you visit this blog every now and then, you should be familiar with the Zappa Universe. In that case, Nigey Lennon should need no introduction.

If not, let me tell you that Nigey had a personal and professional relationship with Frank Zappa. She contributed to a couple of concerts in 1971 and she also wrote a book on Frank Zappa, entitled "Being  Frank".
In 2000, Nigey Lennon released "Reinventing The Wheel", a fine album that presented original material next to remarkable versions of Frank Zappa's 'Anyway The Wind Blows' and Steely Dan's 'Brain Tap Shuffle'. The disc also featured John Tabacco, Mike Keneally and Candy Zappa, and had contributions by Urban Gwerder and David Walley.
July 2002, Nigey Lennon and John Tabacco took part in the 13th edition of the Zappanale Festival in Bad Doberan, Germany. History will remember it as the MEGA Zappanale as it was the year that the Zappa statue got inaugurated.
In the meantime, Nigey did contribute to a couple of albums that Andrew Greenaway assembled and that got released on Cordelia Records, but other then that, things have been rather quiet.

A couple of months ago, however, Muffin Record Productions announced that they would be releasing a completely reworked edition of "Reinventing The Wheel".
The album is aptly called "Reinventing The Wheel Reinvented" and it presents remastered versions of the original recordings, a handful of demos, and a couple of bonus tracks.

One of these bonus tracks is 'Stolen Cadillac'. Sung by Candy Zappa and by the late Jimmy Carl Black, it actually is the last recording that Jimmy did before he passed away.
The other one is 'Opus 1', a piece that Nigey wrote and recorded for Frank Zappa in 1971. It's a short piece (way too short), performed on a grand piano. Nice.

By the way, did you notice the new cover? Nigey Lennon by Don Van Vliet. It's great !!
"Reinventing The Wheel Reinvented" is an excellent album. It definitely needs your attention.

Highly recommended and a good reason for  a short chat with Nigey Lennon. 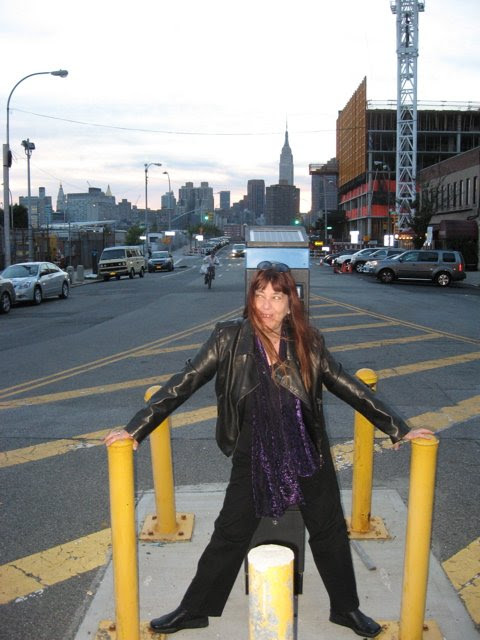 UniMuta : Hi Nigey, congratulations on the new album. It sounds great and the added tracks are a treat.
It's good to see that the album will become available again. This time it will be released on Muffin Record Productions. How did that come about?

Nigey Lennon: Muffin Records originally gave me a contract to do the album in 1998. I was just starting to work on it when I was diagnosed with cancer and had to take quite a few months off for treatment. In the meantime, Muffin went out of business. The CD was released on an indie label, Dinghy Records, in 2000, but distribution was limited. When Muffin reorganized and started up again this year, Reinhard Preuss was happy to get the project back. We added the bonus material, and the rest is history. :)

UniMuta : I love 'Stolen Cadillac'. It's a fine song and Jimmy Carl Black sounds great on it. I noticed that you dedicated the album to Jimmy Carl. Could you share one of your favorite moments with him?

Nigey Lennon : At the Zappanale in Germany in 2002, he and Candy Zappa performed the song together, the first time they had done so. Jimmy came onstage wearing the suede fringed vest he had worn as Lonesome Cowboy Burt in 200 Motels. That vest had some serious history embedded in it -- I took one whiff of it and nearly passed out. :) This moment was captured on video by several German TV crews. The performance was hilarious, by the way, as you can see by my reaction to it in this photo. 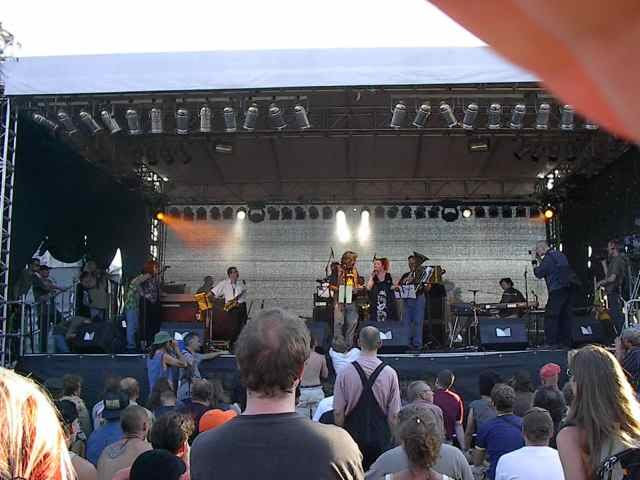 UniMuta : The new tracks are a fine addition but it strikes me that, except for 'Stolen Cadillac', you did not add any recent material to the album. What have you been up to, musically? Can we expect another album? Your Facebook page mentioned a possible new release called "Ship In A Bottle"?

Nigey Lennon : I figured the original release stood on its own. Adding new material would have reduced its impact. Except for "Stolen Cadillac", which fits in with the album's overall concept because of Jimmy's vocal, each of the bonus tracks has a direct relation to the other tracks on the album.

"Ship in a Bottle", which I'm working on now, is going to be a 180-degree turn stylistically from "Reinventing the Wheel Reinvented". It will be semi-acoustic, with orchestral instruments such as violin, clarinet, tuba, oboe, English horn -- sort of a cross between chamber music and the sort of raw, often modal music I love so much: sea shanties, fiddle tunes; a nod to my Irish roots. I'm playing guitar, keyboards, mandolin, harp guitar and doing most of the vocals, with John Tabacco and Scott Pettis, the bass player. The general idea of the album will be the sea, as a metaphor. I'll be including my original songs along with recent tunes by other writers, and some 19th-century stuff to balance it out. I'm enjoying the contrast between some of the music and the arrangements. It's like Captain Beefheart, or the Fugs, meeting Erik Satie.

UniMuta : That sounds like something to look forward to. More recently, you were the special guest in Episode 13 of the ZappaCast podcast. Was it fun?

Nigey Lennon : It was a blast! How could I not enjoy sitting down with a vodka-and-black cherry cocktail and three certifiable lunatics like John Tabacco, Scott Parker, and Andrew Greenaway, and free associating for an hour and a half while they laughed at all my jokes? :)

UniMuta : Excellent ! Thank you for your time.

If you want to know more about "Reinventing The Wheel Reinvented", check out Episode 13 of the ZappaCast podcast where Nigey and John Tabacco discuss the album in detail.
http://zappacast.podomatic.com/