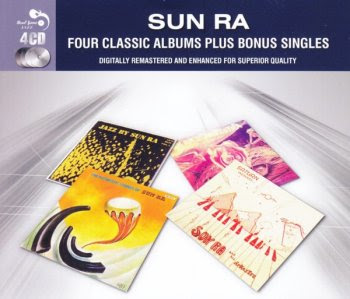 OK, so it's not a brand-new release as it got released last year, and it's not really a sampler as it includes Sun Ra's first four album, but it's the perfect introduction to the early works of Sun Ra.
In 2011, the british Real Gone Jazz label released "Three Classic Albums", a 2CD set collecting Sun Ra's "Jazz By Sun Ra", "Super-Sonic Jazz" and "Jazz In Silhoutte".
I'm guessing that this was a big success as they made a similar one, this time with one extra album, "The Futuristic Sounds Of Sun Ra", plus an extra disc with early singles.