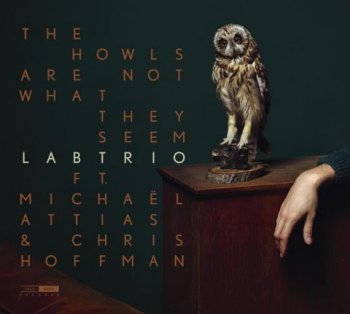 Belgian experimental jazz band Labtrio was founded around 2007, featuring Lander Gyselinck on drums, Anneleen Boehme on double bass, and Bram De Looze on piano.
They released their first album, 'Fluxus' in 2013 on the Out Note Records label.

Last June, Labtrio recorded their latest album. These recordings took place in New Jersey and featured Michaël Attias on saxophone and Christopher Hofman on cello.
Both Lander and Bram had met Michaël and Christopher a couple of years earlier, while studying in New York City.

The result is entitled "The Howls Are Not What They Seem" and the quintet (Labtrio + guests) are touring Belgium at this very moment to promote this new album.

Yesterday, the band played at 'De Singer' in Rijkevorsel. It was a very impressive performance. The first set was rather experimental while the second set sounded more jazzy and had more of a drive.
A nice equilibrium.
I really liked it.

Check out the new album and try to catch the band in concert !!