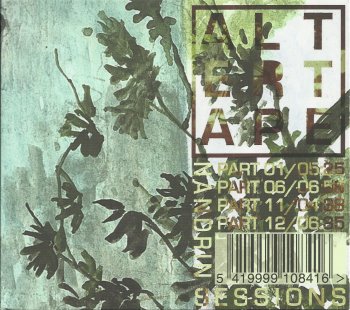 I first heard about Altertape during a concert of Sinster Sister when Mayaan Smith introduced Jan Ghesquière as the guitar player from Altertape.
I made a mental note that I had to investigate this at the next opportunity.

I didn't have to wait long as Altertape released "Nandrin Session", a brand-new 4 track EP. Actually, it's their second release, the first one being the "Glasstic Drops" album from 2014.

Altertape is Jonathan Callens' project. Next to playing the drums and the keyboards, Jonathan also composes all the pieces. Joshua Dellaert plays the bass in Altertape. And Jan Ghesquière completes the trio as the guitar player.
Jonathan Callens also plays the drums for Kiss The Anus Of A Black Cat and for Humble Grumble. Joshua Dellaert also plays the bass for the Skordature Punkjazz Ensemble.

"Nandrin Sessions" present four instrumental tracks. RifRaf magazine defined it as "Jazz meets ambient meets postrock".
I'm not good at labels, but I do think that it's fascinating.
It has been on replay all morning.