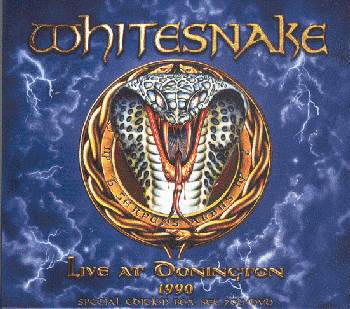 In 1990, Whitesnake played for some 70 000 people at the Donington festival. As it was broadcast by the BBC at the time, numerous copies of the recording had founds it way to the fans (and to the bootleggers). And now, 20 years later, the italian Frontier Records label is releasing the concert on both audio and video.
The "Live In Donington 1990 - Special Edition Box Set 2CD/DVD" package sure looks great. The video is fine as well, and the audio is better than the copies that I had lying around.
As the liner notes say about the video: "Regrettably it is not sparkling Hi-Def, but, on the other hand it's in wonderful watchable Lo-Def Vision".

I bought this little set because of Steve Vai's contribution, and I wasn't dissapointed. Steve played lead guitar throughout the concert, had some nice solos, but also played two of his own compositions: 'For The Love Of God', and 'The Audience Is Listening'.
Beautiful.