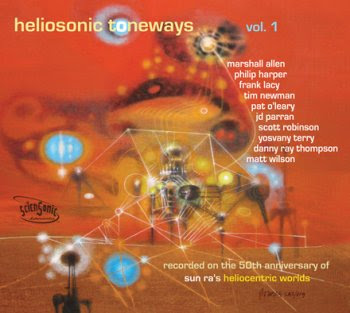 On April 20, 1965, one of the most astonishing recordings in the history of creative music took place at Richard Alderson's RLA Studio in New York City. The Heliocentric Worlds of Sun Ra, featuring the enigmatically beautiful bass marimba (played by Sun Ra himself), sounds like no other record made by anyone, ever. Heliocentric Worlds, Vol. 2, with Ra on "tuned bongos" and clavioline, followed soon after.

To honor the 50th anniversary of this musical milestone, ScienSonic Laboratories convened a remarkable group including two important, longtime Sun Ra Arkestra members: Marshall Allen (probably the only surviving member of the Heliocentric sessions), and Danny Ray Thompson (who joined the band just two years later, in 1967). The goal was to record a project of new and original music, using the distinctive instrumentation and sonic character of the original albums -- including the bass marimba heard on Vol. 1, as well as the boo bams and clavioline heard on Vol. 2. This project could only have taken place at ScienSonic Laboratories, which owns not only boo bams and clavioline, but the actual bass marimba that Sun Ra himself played. Alderson was even tracked down to come in and record the project.

On April 20, 2015, Allen, Alderson, and the bass marimba were reunited at ScienSonic Laboratories for the first time since 1965 - exactly fifty years later to the day. The instruments Ra played (with a 1950s Wurlitzer electronic piano substituting for electronic celeste) were handled by Marshall and Scott Robinson. Two incredible albums of music resulted, corresponding to the sonic profiles of the two different Heliocentric volumes.

This is not a re-creation or "tribute" project. This is completely original music, but made with the sounds and sensibilities used to realize the astonishing vision of The Heliocentric Worlds of Sun Ra. May these become your worlds as well.