They call themselves Zappy Birthday Mister Frank which I think is a weird kind of a name to celebrate the music of Frank Zappa, but then again, you could also call them ZBMF...

The ZBMF project was started by Manu Eveno and Vincent Milleret. Actually, it was a project in three parts. Part one : getting Zappa Plays Zappa to perform in Blois, France. Part two : having Dweezil presenting a master-class (in cooperation with the music conservatory of Blois). Part three: putting together a band to perform the music of FZ.

It's this third part, that band, that took the road to Bad Doberan.
The band had already done a couple of Zappa concerts in 2015 (also opening for the Band From Utopia). A concert at the Zappanale was to be the next step.

ZBMF performed at Zappanale on Saturday. They brought a set of highlights from Zappa's career.
The concert got recorded and was made available in a very limited edition on DVDR.

Here's a snippet from the Zappanale performance :


If my info is correct, the band will be doing another Zappa concert next October, (2016 10 12 - Nancy Jazz Pulsations festival).

Here's the data for the DVDR: 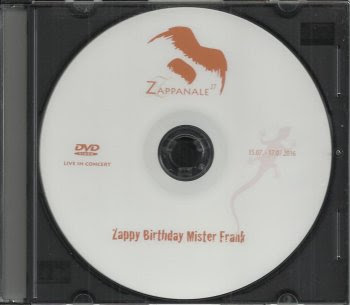