At Zappanale, the video crew records a number of main stage shows. They've been doing this since 2007. Recordings of these shows a being made availabe at the festival ground, but only in a very limited edition of 20 or so copies.
I like the concept. It offers the opportunity to re-live some of the concerts.

I've already mentioned the DVDR-recording of The Muffin Men, Lex Bronkowitz Orchestra, The Magic Band, Hazmat Modine, The Grandmothers with the Yellow String Quartet, ZBMF, The Dorf, and Paul Green's Rock Academy.
The last one in this year's series is a recording of the "Good-Bye" session. This is the final moment on the main stage where musicians from different bands and ensembles join for a jam or for playing some Zappa music.
Rather chaotic most of the time, but it always carries some interesting moments and combinations as well. 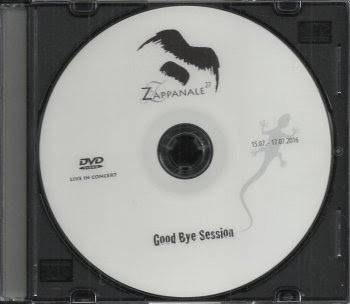 Orchestrated by Paul Green, the Good-Bye Session started with The Muffin Men, Denny Walley, Ed Mann and a couple of Rock Academy kids. I also saw Alli Bach on stage, and Rupert Kettle,
And I heard 'King Kong',