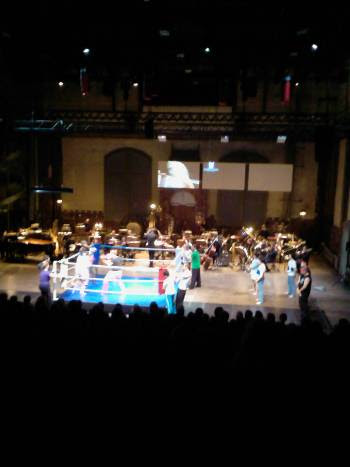 Here's a short review of the "Shark" by Andreas Hosse.

The Saarländisches Staatstheater / Staatsorchester performed Frank Zappa's "The Yellow Shark" at a sold out, 300 visitors, Radialsystem in Berlin on 2011/03/15. The stage was divided in two parts: the martial arts sportsmen and woman were in front, and the 24-headed orchestra was in the back.

The concert was often interrupted to give the sportsmen the chance to say something about their personal relationship to martial arts. This lasted up to four or five minutes, often followed by a sparring. The audience, including me, was quite irritated with what was going on on stage. The first applause only came up after half an hour, silence until that point.

For me, it was two different events at the same time. It didn't fit. I tried to concentrate on the orchestra by looking over the sportsmen und by trying to ignore the martial artists as much as possible.

The performance of the Orchestra was OK. It was not as dynamic as the Ensemble Modern, but it was OK. 'Girl In The Magnesium Dress' was definitly a highlight of the show.