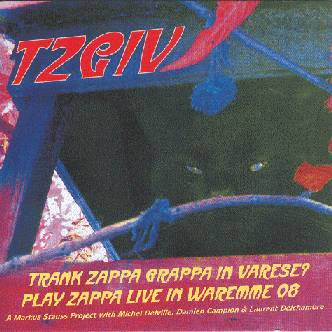 When I first heard the TZGIV demo in 2006, I was pleasantly surprised. I thought it was a nice little one-time-project. Who would have thought that this project would actually tour and would release a couple of albums...
November 2007, I saw TZGIV in concert in Baarle Nassau and I was really impressed. The band played a very varied set and there was a lot of room for improvisation.

One year later, the band performed (at least) two concerts where they performed a set of Zappa material. It's a part of the Waremme concert (2008/11/28) that surfaces on this album.

The choice of compositions is great:

The performance great to say the least. Four top musicians and the band has found a fine equilibrium between the beautiful themes and melody lines on one hand, and free and freaky improvisations on the other. I love it.