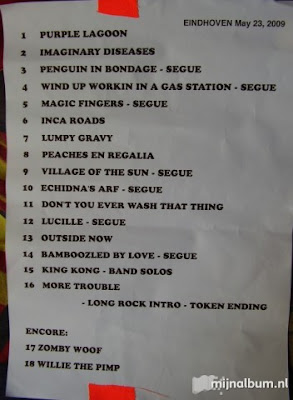 As in "Finally, I'm back".
I had some troubles with my internet connection, but these seem to be solved now...
I guess that's what you get when you live in Belgium. Don't get me wrong, Belgium is a great place to live, but the internet services suck big time.
Last week took me to the Zappa plays Zappa show in Ghent. To the Handelsbeurs.
The Handelsbeurs is one of the finest venues that I know. A beautiful environment (both in- and outside), a nice concert hall, and a polite audience. What else does one need?
Well, I'll tell you...
The only thing that you need (and it's an essential thing) is a good soundman, and boy, did I miss a good soundman.
Why does the guy behind the p.a. system think that loud is better?
Well, I'll tell you that as well...
'Loud' = 'Better', because extreme loudness makes your body produce aldrenaline. It's a safety precaution / reaction. Extreme loudness is considered dangerous by your brain, so the brain makes your body produce an extra dose of aldrenaline to keep you alert; to keep you from going into shock. And this adrenaline makes you go "Wow, this is a great concert..."...
To be honest, I did think of the Ghent show as a fine concert, but not because of the loudness.
It was way too loud. My hearing didn't come back to 100% until the day after.
The sound was completely saturated. One big blurry ball of sound.
Too bad.
Ghent was Friday, so Saturday we went to Eindhoven.
Hadn't been to the Effenaar in ages. Guus Veldhuis used to organise his Zappa-Days over at the Effenaar in the early eighties. Hadn't been there since.
The Effenaar was packed. Sold-out.
The show was better than the Ghent one. Dweezil's solos were better and new singer Ben Thomas really went for it. He did some great improvisational stuff in King Kong.
The entire band was in great shape and played the Zappa stuff as if they had been doing it for years.
Here are some youtube links that I got from Bazbo:
Theme from Lumpy Gravy - Peaches En Regalia
- http://www.youtube.com/watch?v=2LzqbM-0NUw
Outside Now
- http://www.youtube.com/watch?v=BO7ym09iCoE
Bamboozled By Love
- http://www.youtube.com/watch?v=eixYUh1wdRU
More Trouble Everyday
- http://www.youtube.com/watch?v=H3puPxtbJGw
Willie The Pimp
- http://www.youtube.com/watch?v=iDfuJkNZUgQ
And here's the link to Bazbo's photo page:
http://www.bazbo.net:80/wp/?cat=49
I know, the ZFT is very aggressive towards bands that play Zappa's music and towards festivals and websites that want to do something with Zappa's music.
And I don't like that. I don't like that at all.
Still, I like Zappa's music too much to boycot the ZpZ concerts.
In a couple of months Project/Object will be at the Effenaar as well. And they will be bringing along Ike Willis and Don Preston.
You know where I will be :-)
Geplaatst door UniMuta op 11:06 AM