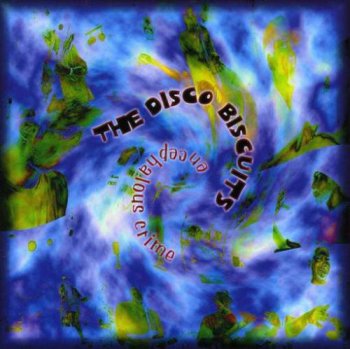 I remember ordering "Encephalous Crime" from the band's website around 2000. I had never heard of the Disco Biscuits before, but the album included the band playing Frank Zappa's 'Pygmy Twylyte" so I wanted to check them out.
I wasn't aware that the first pressing had sold out and that I was buying the second pressing of this disc. I only noticed it when I found out that the album that I received did not include the Zappa composition.
Long story short: wrote to the band, received a kind answer explaining that they didn't want to get into trouble with the Zappa Family Trust, AND I received a CDR copy of the original album. Nice chaps, these Disco Biscuits.
Still, an original copy of the album did stay on my want-list (being the silly collector that I am) so I was quite happy when I scored a first pressing of this album recently !

Here some ambient / trance music by The Disco Biscuits :