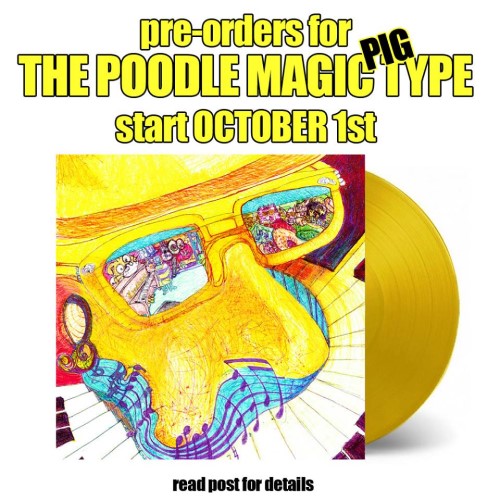 Okay gals and guys ... this is where things get serious.

In follow-up to the announcement about The Poodle Magic Pig Type being released in a limited edition Yellow Vinyl, I am excited to announce that you can pre-order the album, starting NOW.

The album will be released in two formats.

1) Limited edition (100 signed and numbered copies on yellow vinyl - INCLUDING a signed CD);

The vinyl edition will, due to limited time capacity, not include all the tracks - and that's why you will get the CD containing all the tracks, included in the purchase of the vinyl.

This album is NOT going to be released digitally (Spotify, iTunes and the lot), and will be only available by (pre-)ordering directly by contacting me by email.

I will place you on the pre-order list for a vinyl album, starting at #11 (as numbers 1 through 10 and #100 are reserved), if you would like a specific number (between 11 and 99, 99 included) - please state so in your mail.
If you want to pre-order just the CD, please put that in the mail.