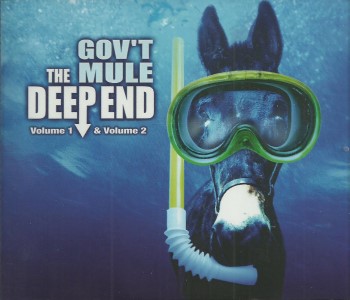 After the loss of Allen Woody, Gov't Mule recorded a tribute called "The Deep End", inviting various bass players (and other musicians) to participate.
The response was overwhelming and Warren Haynes and Matt Abts released two albums from these sessions.
"The Deep End - Volume 1" got released in 2001 as a single CD album. There's also a version with a 4 track bonus disc.
"The Deep End - Volume 2" got released later in the same year. Also as a single CD album, plus a version with 4 (different) tracks on a bonus disc.
In 2002, both albums got compiled on a 2 CD set. The obvious choice however, is the 3 CD set version as the added bonus disc collects all 8 tracks from the previous extra discs.

Gary Lucas and Tony Levin guest on 'World Of Confusion' on Volume 2.