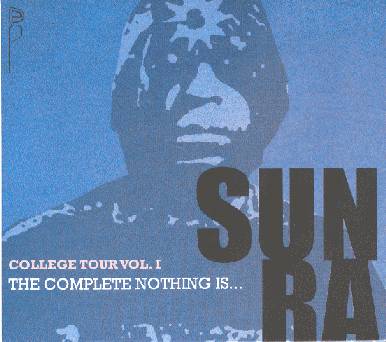 As Russ Musto explains in the liner notes of "College Tour Vol.I", this was a full year before Jimi Hendrix released his "Are You Experienced" album; one year before The Beatles did "Sergeant Pepper's".
The Mothers Of Invention had just recorded their "Freak Out" album. It wasn't even out yet. No wonder that Frank Zappa decided to move the band to NYC little after that.

Sun Ra and his Arkestra were defining new boundaries, pushing the limits.
On "College Tour", the band performs some superb Sun Ra compositions and Arkestra members John Gilmore, Marshall Allen and Pat Patrick show why most Saturnians consider this line-up as their favourite.

In my list, "College Tour Vol.I" is the perfect introduction to Sun Ra.
If you're not familiar with the music of Sun Ra, get your hands on this one.
If you already know "Nothing Is...", you know that you will need "College Tour" as well.

Released by and available from
http://espdisk.com