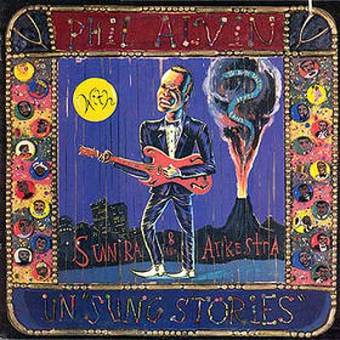 Phil Alvin, frontman of The Blasters, released his first solo album in 1986. The album was entitled "Un Sung Stories" and featured The Dirty Dozen Brass Band as well as Sun Ra and his Arkestra as special guest.
Sun Ra & his Arkestra can be heard on three tracks!!

On the Saturn Newsgroup ihor added:

"i came across this phil alvin album 'unsung stories' at
http://twilightzone-rideyourpony.blogspot.com/2010/04/phil-alvin-unsung-stories-1986.html
which also has a link to a 128 kbps mp3 of the album. of interest to
me was the appearance of sun ra and the arkestra on three tunes,
doubly so because phil alvin and sun ra and the arkestra were doing
two cab calloway tunes - 'the ballad of smoky joe' and 'the old man of
the mountain' - and 'brother can you spare a dime'. being a bit
familiar with the cab calloway songs, i was wondering how they were
going to do these - would they out-'hi-de-ho' calloway, or miss the
mark, or what..."
Geplaatst door UniMuta op 11:59 AM