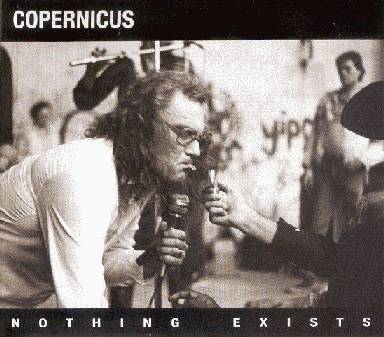 "Nothing Exists" was originally released in 1985. It presented performance poet Corpernicus (real name Joseph Smalkowski) using psychedelic music and free jazz to accompany his readings.
The band started in 1978 in New York City with Copernicus, Larry Kirwan and Pierce Turner.
Kirwan (on electric guitar, keyboards and vocals) and Turner (keyboards and vocals) are the musical masterminds, adding to the vocals that are spontaneously created by Copernicus.

"Nothing Exists" was Copernicus' first album. It combines complex music with Copernicus' extraordinary view on the quantum world.

And it looks like Copernicus found a good home at MoonJune Records.
MoonJune released "Disappearance" last year, and continues now with a re-released of "Nothing Exists.

Very impressive. Check it out.