RUFUS HARLEY - RE-CREATION OF THE GODS 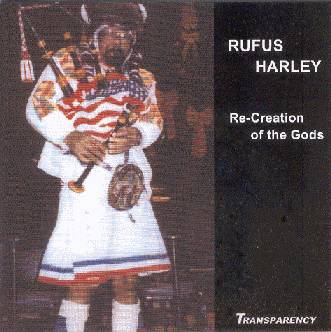 "Rufus Harley, Jr. (b. near Raleigh, North Carolina, May 20, 1936; d. Philadelphia, Pennsylvania, July 31, 2006) was an American jazz musician of mixed Cherokee and African ancestry, known primarily as the first jazz musician to adopt the Scottish great Highland bagpipe as his primary instrument."

At young age, Rufus Harley studied saxophone, flute, trumpet, oboe and clarinet.
After seeing a scottish battalion playing the bagpipes at John F. Kennedy's funeral, he switched to the bagpipes.

Rufus Harley released "Bagpipe Blues" in 1966 and he continued to release approximately one album a year until 1972.
It's the 1972 album "Re-Creation Of The Gods" that got re-released on CD in 2006.

Impressive stuff.
At first, scottish bagpipes against jazzy keyboards and a double bass do make your eyebrows move, but when you keep on listening, you're in for a treat.
The thing about bagpipes is that once that you've started playing, the notes have to keep on coming. It's not like you can play short phrases, or that you have to catch your breath every once in a while. The notes just keep on coming.

If you're in for new sounds, might I suggest to try some Rufus Harley...