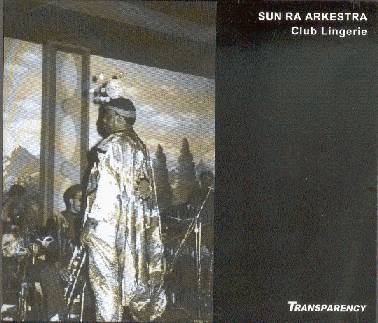 The Transparency label started releasing Sun Ra material in 2005. After a couple of DVDs, the label continued with two albums in the Sun Ra Audio Series, the second one of which was "Live At Club Lingerie".

The date is December 14, 1985, and it's Sun Ra and the Jet Set Omniverse Arkestra that are performing at the 'Club Lingerie' in Hollywood, CA.
As usual the setlist is a mix of unknown pieces and some classic Sun Ra material.

I never actually saw Sun Ra in concert, but I was fortunate to catch the Arkestra with Marshall Allen six nights in a row in Tilburg a couple of years ago. What I hear on "Club Lingerie" exactly is the atmosphere that I experienced in Tilburg.

If you're not familiar with the music of Sun Ra, this could be the perfect introduction.