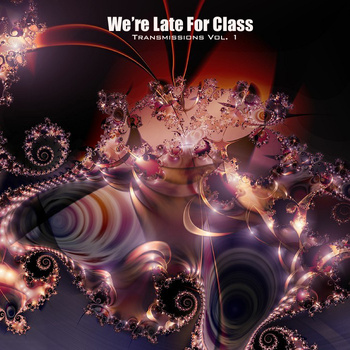 We're Late For Class is a live, all improv college band, about a dozen rotating members, pro-herb, anti-contract and some cut & paste.

Their website adds:
"The first in a series, probably. "Sequel To The Return Of The Son Of Monster Magnet" started out as a nod to side four of Frank Zappa's Freak Out, but halfway through the 11 minutes turned into a Hawkwind jam. We didn't expect that. So, we went full bore Hawkwind on "Wind Of The Hawk." The inspiration being us previously being accidentally inspired to sound like Hawkwind. Seemed like a good enough excuse. Speaking of Zappa, that's actually Frank excusing himself to take a piss at the beginning of "Glenn Miller's Luggage Is Missing, Too." It's a never before heard snippet we managed to acquire (don't ask how), making this a "must have" for Frank Zappa collectors out there. Yet another Creative Accountants idea for expanding our fan base. The song itself (with overdubbed vocals) is a spoof of Andy Mackay's similarly named tune from his 70s' rock opera, Rock Follies, with an unlikely musical debt to an old Mothers of Invention tune. Yet another 20 minutes of pointless improvisation from March 8-9, 2008. Except * recorded/dubbed March 15-16, 2008."