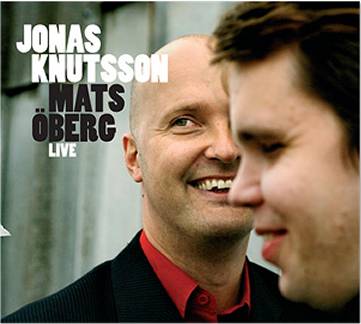 "Live" captured saxophone player Jonas Knutsson and keyboard wizard Mats Öberg in concert in February 2008 in Stockholm.
After listening to the first couple of minutes, it's obvious that these musicians have a history together. In the liner notes, Jonas Knutsson describes how he met Mats Öberg: "On a summer's day in 1981 I met Mats Öberg for the first time. I was 16 and did a recording for the local radio station in our home town Umea with Mats' cousin. He was 10 years old and when I asked him how he liked the music he said: Fine, but three-line E on the piano is out of tune...".

"Live" presents eight beautiful jazz tunes. A couple of them were written by Jonas Knutsson, another two by Mats Öberg, but there's also a swedish traditional, and even Joe Zawinul's 'In A Silent Way' (with some superb harmonica !!).
The album is an excellent mixture of beautiful, melodic tunes. As each track clocks around seven or eight minutes, you can imagine that both musicians take their time to explore the composition.
This Jonas Knutsson / Mats Öberg collaboration resulted in an extraordinary performance and album.

It's joyful and sad at the same time.
It's highly interactive.
It's what music is all about.

Highly recommended.
One of my favourite records of 2009.

The album is available through the Country & Eastern website:
http://www.countryandeastern.se/