BERGER, KNUTSSON, SPERING & FRIENDS - SEE YOU IN A MINUTE 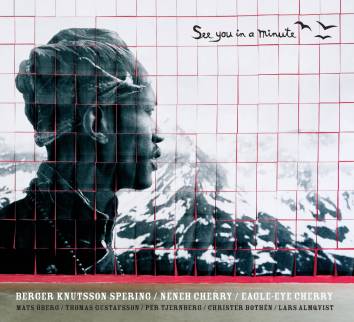 "See You In A Minute" is the title of a Don Cherry tribute album that got released by the Swedish Country & Eastern label in 2005.
The album consists of two major parts, the first being a 32-minute improvisation, and the second one the band's rendition of eight Don Cherry tunes.

The improvisation is entitled 'See You In A Minute', and is a mix of a jam and a two Don Cherry compositions. The result is astonishing. 'See You In A Minute" has this hypnotic vibe that will take you along for a thirty minute ride. Incredible.
Bengt Berger (drums), Jonas Knutsson (sax), Christian Spering (bass), Per Tjernberg (percussion), Christer Bothen (donso n'goni and bass clarinet), Thomas Gustafsson (sax) and Mats Öberg (keyboards) make this an extraordinary piece of music. I really like the effect of the different saxes doubling each other, or almost doubling each other, while the rhythm section and Mats' keyboard lay out the groove.
Great melody lines, great solos...

The second part of the album features special guests Neneh and Eagle-Eye Cherry. Both have earned their credits in pop music as fine vocalists.
There are only three non-instrumental tracks on this album, and these are devided between them. Eagly-Eye sings the catchy, laid-back 'Clicky Clacky', Neneh takes on the sensual 'Ganesh', and the both of them team up for 'Dina Kana Gina'.
Icing on the cake is Mats Öberg playing the harmonica in 'God Is At The Door'.

"See You In A Minute" is a beautiful album. It's a fine mixture of world music and jazz, with a bunch of top musicians that pay tribute to the great Don Cherry.