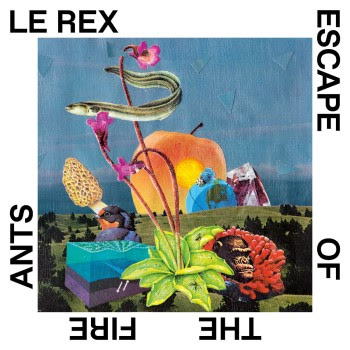 The latest release by Le Rex is called "Escape Of The Fire Ants". It's the band's fourth album. The first two were released by the Swiss Unit Records label, the latter by Cuneiform.
Le Rex is a brass quintet and consists of Benedikt Reisinger on alto sax, Marc Stucki on tenor sax, Andreas Tschopp on trombone, Marc Unternäher on tuba, plus Rico Baumann on drums.
The ensemble combines a groovy, funky sound with original melodies and quirky rhythms into beautiful instrumental modern jazz.

Original, eclectic compositions (it's no coincidence that the group named themselves after an abandoned cinema complex on the island of Corsica) with a recognizable sound. My cup of tea.