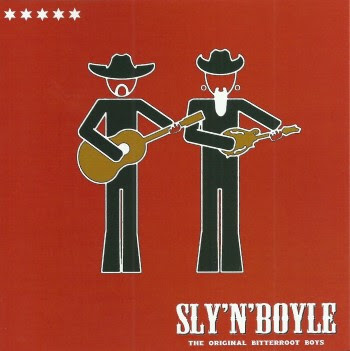 Frank Sly (guitar, backing vocals) and James Boyle (lead vocals, mandoline) recorded one album. It got released in 2007.
"The Orignal Bitterroot Boys" presents 9 tracks. All rock classics that have been reworked for a country / bluegrass instrumentation.
Love it.
Superb versions of 'You Ain't Seen Nothing Yet', 'Kiss', 'These Boots Are Made For Walking', and many more, including a fine version of Frank Zappa's 'Bobby Brown'.

Add three remix bonus and two live tracks and you've got one impressive album.
A great addition to The Others Of Invention.
http://www.united-mutations.com/z/frank_zappa/fz_ooi_albums.htm