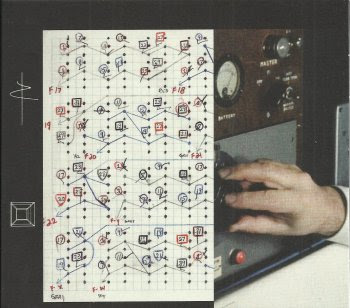 Previously called Wofo, Imagine Raymond has made a remarkable album.
From the liner notes :

Wofo initially focused on Raymond Scott's accomplishments as a jazz composer, performing his combustile nuggets from the 30's with an appropriate energy and sense of humor, delighting in the eccentricity, exotic melodies and irresistible glee. True to the cartoonish spirit of the music, but enlivened with that one missing ingredient: improvisation. However, Wofo's Scott tribute was radically altered from within. Adding the old school skills of new member Dijf Sanders (electronics, keys), the band, now called Imagine Raymond, switched its focus to Scott's electronic period as well.

The striking effect is that these re-workings of the mysterious, eerie and unpredictable electronic compositions are steered towards jazz territory - because of the instrumentation, the added rhythms - but with a schizophrenic twist. Many of the eccentricities and tics of the originals are kept intact, but at the same time, the septet adds its very own, rich flavor. Combined with a few older compositions by Scott and one original contribution, their interpretations find an electro-acoustic middle ground between the old and the new.

The compositions were re-constructed and meant to be experienced with the brand new visual associations of Victor Van Rossem, who mimics some of the band's techniques during live performances, adding another layer of interaction. Raymond Scott was said to have been not much of a people's person (electronic equipment was so much easier to deal with), but something tells me he would have loved this accomplishemnt, which is equal parts loveing tribute and stubborn re-invention.

I love it !
Highly recommended !