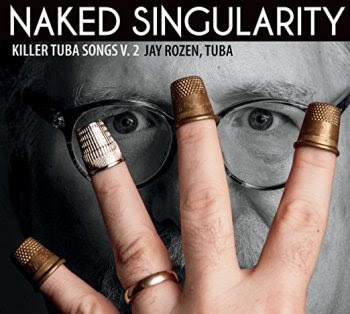 Tubist, composer and improvisor Jay Rozen has toured and recorded with Anthony Braxton and with Wadada Leo Smith, to name just two.
He also was at the Zappanale festival in Bad Doberan, Germany in 2002 where he performed with Candy (Frank's little sister) Zappa, Nigey Lennon, John Tabacco and Mike Keneally.

In the liner notes, Jay adds : "This particular festival was notable due to the dedication of a statue of Zappa in the town square. I smart-talked my way into having my arrangement of 'Sofa #2' (reworked for tenor sax, bari sax and tuba) played during this dedication. Try to imagine my excitement at playing my arrangement of my favorite Zappa tune played in front of hundreds of rabid Zappa fans while many ex-Mothers of Invention and other Zappa ex-band members stood behind us. These included Don Preston, Bunk Gardner, Jimmy Carl Black, Roy Estrada, Napoleon Murphy Brock, Ike Willis, Mike Keneally, among others. Definitely a high point of my career."

An excellent album.
Issued by Naxos / Composers Concordance Records, a label that you have to watch (and hear).