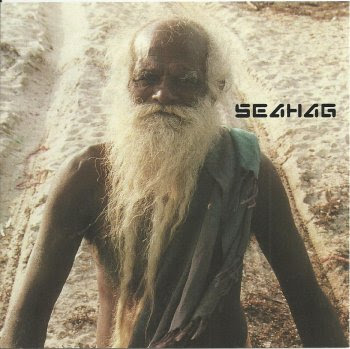 Somewhere last year, after a Band From Utopia show, I brought home Robbie 'Seahag' Mangano's "Full Moon Fever", a superb release !
Looking for data for Robbie's discography, I took note of his "We'll Got To Be About Da Bidnus", an album that he had released in 2002.

As it happens, thanks to the inimitable patterns of the internet, I recently found a copy of "We'll Got To Be About...".
The album presents 22 tracks: original (lo-fi) music (plus some sampled voices), with influences that vary from 70's rock music to experimental guitar stuff.
Nice. Very nice.

All this to say that The Band From Utopia is touring again.
In Europe.
Go see them.
And take home Robbie's latest release : "Bumbleweenie".
He might still have a couple of copies of "Full Moon Fever", so buy one of these as well.

And while you're at it, check out "We'll Got To Be About Da Bidnus" on iTunes .

Here's a snippet of Robbie with the Band From Utopia.
Recorded in 2012.