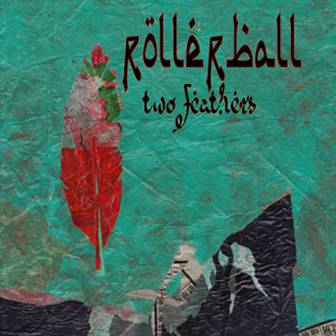 I had never heard of Portland-based band Rollerball before.
The band has been around for fifteen years, has released fourteen albums and has toured Europe five times. Rollerball’s music is defined as a mixture of experimental / progressive rock with gothic and jazzy undertones.
Reason enough to give this a closer listen.

The first thing that makes “Two Feathers” stand out, is the exceptional artwork. The album cover is a nice, plain fold-out cardboard sleeve, but the graphics are fascinating. It’s sort of a collage of artwork of ancient cultures.
And then there’s the font. I’ve never seen anything like it. It looks like some sort of hieroglyphic or arabic writing, but after a closer look, it's just weird letters, so I was able to read it. Very nice.
It made me even more curious about the music.

The first notes of “Two Feathers” set the tone: dark, melancholic jazz. Against this slow and groovy background, Mae Starr’s voice is a powerful addition. It has an almost hypnotic effect, dragging you into the world of Rollerball.

I’ve played the album a couple of times in a row, and I can only say that it’s good. It’s really good.

Rollerball’s music is difficult to define, and yet, it has a very recognizable, distinctive sound.
Check it out:

The 'regular' edition of this album is a CD / DVD set.