STEPHANE GALLAND - (THE MYSTERY OF) KEM 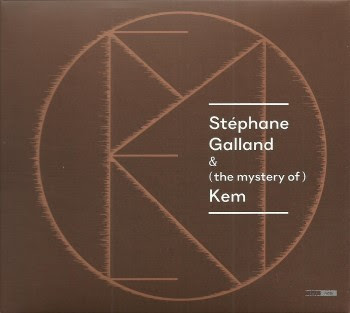 Earlier this week, I attended "Requiem pour L.", a collaboration between Fabrizio Cassol and Alain Platel, with Mozart's 'Requim' translated in today's world by Fabrizio Cassol. Quite impressive.

Yesterday, however, I saw another part of Aka Moon presenting his most recent project: Stéphane Galland performed his brand-new "(The Mystery Of) Kem" album at Flagey in Brussels.
Stéphane explained during the concert that Flagey felt like home. Earlier this month, he had performed at Flagey with Philippe Catherine (in a tribute to Marc Moulin), had given some master classes, and had rehearsed for "(The Mystery Of) Kem" concert.
The concert itself was breathtaking. Superb modern jazz with crazy rhythms and with beautiful textures added by Indian carnatic flute player Ravi Kulur.
Icing on the cake was the guest appearance of Jean-Paul Estiévenart who you should remember from his days with Michel Delville's The Wrong Object.

The album got released yesterday as well. On CD and on vinyl.
You can get it here :
https://outhere-music.com/en/artists/stephane-galland/releases
The same page also shows the digital download options.

It's hard to believe that this is the first album by this quintet. They sound as if they've been playing together for ages.
Sylvain Debaisieux on tenor sax, Bram De Looze on piano, Federico Stocchi on bass, Ravi Kulur on carnatic flutes, and Stéphane Galland on the drums.
And Ibrahim Maalouf plays the trumpet on 'Memetics' !!

Great music. Amazing interaction. And a beautiful story behind it.
Highly recommended !!

One of the few tracks that does not feature Ravi Kulur :


And a live track from 2017 that does feature Ravi Kulur !

Email ThisBlogThis!Share to TwitterShare to FacebookShare to Pinterest
Labels: aka moon, stéphane galland