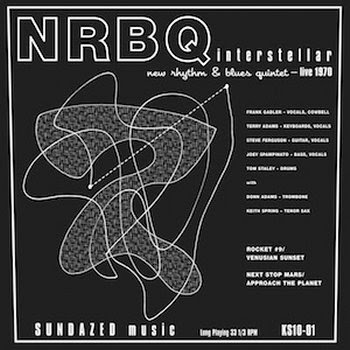 The three new Sun Ra 10" albums that recently got released by Modern Harmonic can be ordered from Sundazed in a package that also includes this NRBQ "Interstellar" 10" mini-album.
At first I thought that "Interstellar" had been re-issued, as it was originally released in 2003, but I was wrong. Anyway, it was a fine deal from Sundazed to include this album from the New Rhythm and Blues Quintet in the package. It sounds great.
Info has been added to the United Mutations Archives.

Looking for a bit of extra info on NRBQ, I learned that they also made music for The Simpsons...
But they also know how to rock !!
Here's 'I Got A Rocket In My Pocket':