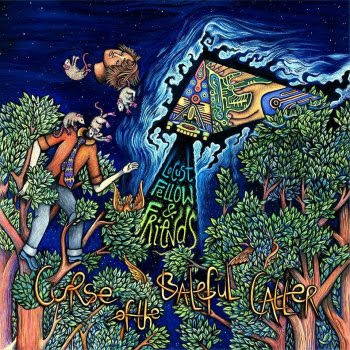 The German Psychofon Records label has recently impressed us with fine releases by Ostrich Von Nipple and by Randy Rose (lead singer of The Residents).
Next up at Psychofon is an adventurous release by Locust Fellow, entitled "Curse Of The Baleful Caller".

Actually, it's quite a daring concept. Mr. Locust Fellow has composed an album of music to the album's art. To be more precise, the project started by Poxodd making an album cover to which Locust Fellow composed the music.

Supported by kindred spirits Ostrich Von Nipple, Shitty Bedford, r0b0t and others, Locust Fellow did an excellent job.
"Curse Of The Baleful Caller" is the kind of album that completely absorbs you. Describing it as a mixture of psychedelic music and trance-soundscapes with tribal ritual rhythms just doesn't do it right.

This is music from the other side of the fence. "Curse Of The Baleful Caller" sounds like what the album cover looks like. Outsider art translated into music.
I love it.