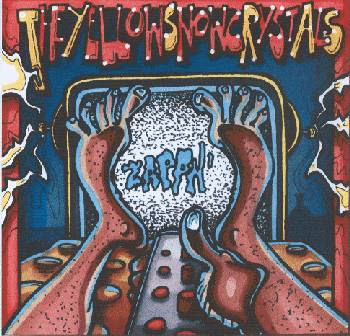 If you visit the United Mutations blog every once in a while, you'll probably know that I visited the Mosae Zappa Festival in Maastricht in early May. It was a very fine festival with two nights of Zappa and Zappa-related music. I loved it.
Each and everyone of the bands that performed did a superb job.
One of these bands was The Yellow Snow Crystals. This german quartet combined Zappa and jazz and mixed it with a fine dose of humour. Lots of instrumental material, but also some very funny vocal songs (translated and sung in German). Great.

Trombone player Paul Hubweber told me that the band was working on an album. If the album will be something like the "Zappn'" demo that he gave me, we'll soon all be dancing to the music of The Yellow Snow Crystals.
The Zappateers among you should check out the audience recording of the Mosae gig. It gives a fine idea of what the band is about. And we should all try to catch these guys in concert again. As I said, this was great.
Keep an eye out for their album!