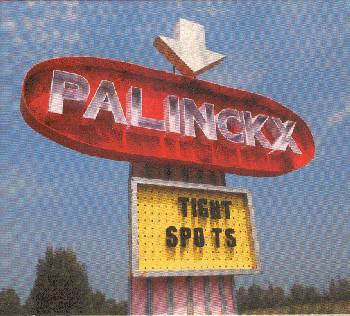 The last time that I saw Palinckx in concert was in April 2006. The concert was entitled "Fab 8 plays #9", and it was as experimental as the title suggested. I remember my friend (Ive H.) and me bringing some people along, having convinced them that it would be something like a Beatles quiz.
Actually, it was something like a Beatles quiz, just not the quiz that they had expected...
Fun.

And here's "Tight Spots". Also released in 2006 and collecting recordings from 2004 to 2006.
It's not just the latest, but it's also the last Palinckx record.

Less experimental than some of the previous Palinckx releases, "Tight Spots" still has the recognisable Palinckx sound. The album is obviously influenced by 70's psychedelic, progrock and experimental music. Think Beefheart and Pere Ubu, or the more contemporary dEUS or Zita Swoon. Jacq Palinckx' guitar work is great. Bert Palinckx & Alan Purves keep this train rolling, DJ DNA adds moog and more, and Han Buhrs lifts it to the next level.

Let's be blunt about this: "Tight Spots" is a fabulous recording.
Tip to the hat !
& thank you very much.