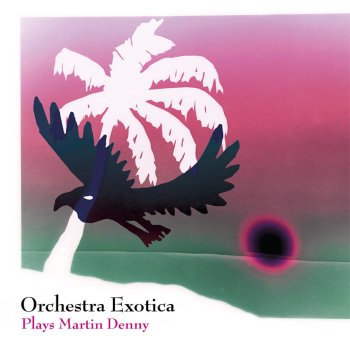 The "Orchestra Exotica Plays Martin Denny" album has kept me company for quite a lot of car kilometers the last couple of weeks. I can keep on listening to it and always find something that I hadn't noticed before.
Excellent stuff.

The Orchestra Exotica project started with Bruno Vansina creating a shadowplay to Martin Denny's music for his son's school. On request of Teun Verbruggen, the project evolved into a performance with live music, entitled "The Serpent". After a couple of performances and with the aid of Dimitri Duquennoy, "The Serpent" got revised and adapted to "Maité, the Girl and the Bird".

From the liner notes :
An absurd Darwinian Creation narrative without words and with live music. The life of M, a story in which Godzilla, Snowwhite's poisonous apple, the first man on the moon and a broiled chicken play a role.

To take the entire venture even one step further, Pierre Vervloesem arranged the music for a septet, hence the Orchestra Exotica.

"Orchestra Exotica Plays Martin Denny" presents 15 pieces of exotica. A voyage into an imaginary world.
As a superb bonus, the extra disc has a recording of the music from "Maité, the Girl and the Bird", where the music got performed by a trio.

Wikipedia adds : Martin Denny described the musical style (of Exotica) as "a combination of the South Pacific and the Orient...what a lot of people imagined the islands to be like...it's pure fantasy though."
Popularity got a boost when Hawaii became the 50th state of the U.SA in the late fifties. CD-reissues gave it another peak in the ninetees.
And now, with The Orchestra Exotica, it's back to stay.

Essential listening !!
Available at the Off Records website:
http://off-recordlabel.blogspot.be/2017/08/opv012-orchestra-exotica-plays-martin.html