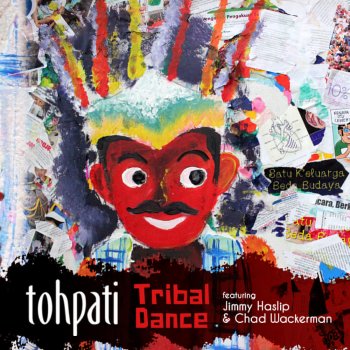 Indonesian jazz guitar player and composer Tohpati has a new album out on the MoonJune Records label.
The album is called "Tribal Dance" and it features Jimmy Haslip on bass, and former Zappa and Holdsworth collaborator Chad Wackerman on drums.

"Tribal Dance" a superb album, focussing on melodic fusion guitar.
from the MoonJune website:
On Tribal Dance, there's no shortage of Tohpati's trademark breathtaking, acrobatic axe-wielding. Towering power chords, distorted spare-note lead lines, unexpected machine gun-blasting sonic assaults, chugging rhythmic grooves, and even a host of elegantly-nuanced jazz phrasings, are all in attendance -- summoned at will, and in omnipotent fashion.
His explosive fretwork often appears as the musical equivalent of a pounching cobra (or one that is coiled and ready to strike!), yet it is his intuitive, prescient interplay with this formidable world-class rhythm section that emerges victorious on this stage. A powerful synergy prevails, as Tohpati locks in with Haslip’s dubmaster basslines and the rubber-limbed, imaginative kitwork of Wackerman. The trio generate wave upon wave of infectious syncopations and robust grooves, gloriously decorating a very special session.

Check out the following videos. Extraordinary gutiar playing and a fascinating rhythm section !!