MIKE KENEALLY - YOU MUST BE THIS TALL BONUS TRACKS 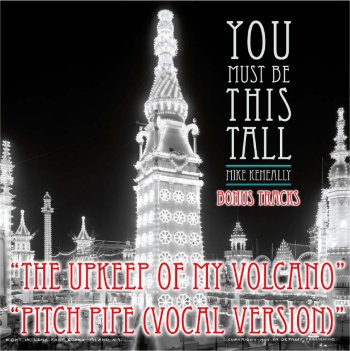 Mike Keneally has released two bonus track to his latest "You Must Be This Tall" album. These tracks were made available for free for those who helped to promote the album through the various (social) media.

Mike Keneallly:
" 'The Upkeep Of My Volcano' came from trying to figure out what to do with the basic material which ultimately became "Kidzapunk" on the finished album. It features a completely different melody/lyric over a much-shortened version of the basic track. For more information about volcano maintenance please refer to the book The Little Prince by Antoine de Saint Exupéry.
'Pitch Pipe (Vocal Version)' was almost the way it ended up going on the album, before I decided that the instrumental version fit better with everything else. This vocal "space opera" version seems to me to be a distant cousin to "Sooth" from Boil That Dust Speck. It is immensely bizarre."

I'm pretty sure that these tracks will be made available to a wider audience soon. They deserve to be heard by every MK fan.