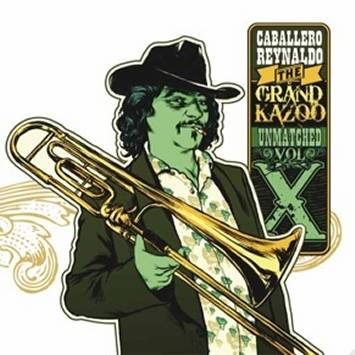 The tenth volume in the extraordinary Unmatched series has Caballero Reynaldo team up with his friends for some genuine country music.
Don't get me wrong, Caballero Reynaldo and his Grand Kazoo band don't just play any country music. No, no, no. They recorded some very familiar tunes, and wrapped them in a country package.
'Lumpy Gravy', 'Pojama People', 'The Torturne Never Stops', ... 53 minutes of Frank Zappa compositions, and each and everyone of them sound like they were played by a country band.
I love it.
You can hear the banjo, the mouth-harp, the honkey tonk piano.
The best thing about this album is that it's not just funny. It has some great arrangements, and each song sounds like it was recorded by a different band. I've played it three times in a row, and all these images keep popping up in my head: Ennio Morricone, Johnny Cash, ...