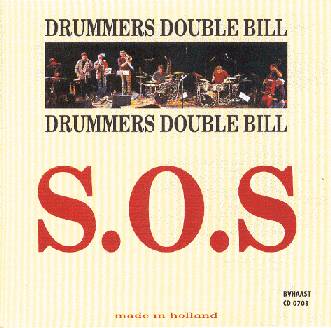 January 14, 2006, I saw Drummers Double Bill in concert at the 'Plusetage' club in Baarle Nassau, NL. If I'm not mistaken, their debut "S.O.S." album had just been released.
Drummers Double Bill was build around Rob Verdurmen (drummer for the Willem Breuker Kollektief) and Arend Niks (drummer for Corrie en de Grote Brokken, Niks Project, ...), so I remember being curious of what they would be playing, especially since they would bring along a fine group of musicians, including one of my favourite guitar players.
The concert was great, and the "S.O.S." album made it to the top of my want-list.