DON PRESTON'S RETROSPECTIVE IS OUT 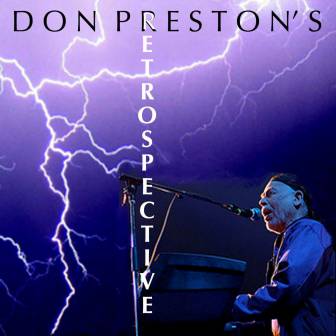 Don Preson's latest album is out, and it's on Crossfire.
"Retrospective" is a very impressive collection of pieces from different periods of Don Preston's career. There's a stunning performance of 'I Can't Breathe' by Raw Milk, there are a couple of tunes from the Don & Bunk Show (Don's fabulous duo with Bunk Gardner), and some extraordinary performances by the Akashic Ensemble (just listen to 'Takeoff'...). And there's even more. Just click the short-cut to get the entire track-list...

The liner notes of "Retrospective" state that about half of the material on this disc has been previously released. Most of it on Don's private label Brain Records, so it's good that it has become availabe to a wider audience right now.
"Retrospective" is a great addition to the two previous Don Preston albums that got released on the Crossfire label: "Vile Foamy Ectoplasm" and "Works".
If you already have these two, you know what to expect.
If you don't have them, you've got a serious gap in your music collection. Don't forget: this is Don Preston. He was jamming and jazzing to amoeba movies in the early sixties. He joined the Mothers Of Invention about 40 years ago. He performed and recorded with Bobby Bradford, Jon Carter, Carla Bley, Robbie Krieger,... And he's still performing on this very day, with Project/Object.