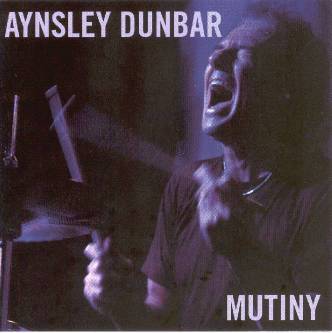 Aynsley Dunbar first met Frank Zappa as a member of The Jeff Beck Group, but solidified that meeting by jamming with him at Belgium's Amougies Festival in the fall of 1969, where Dunbar's band "Retaliation" was performing, Alex Dmochowski was playing bass with them. Zappa was there as Master of Ceremony for the event.
March / April 1970, Aynsley Dunbar recorded Zappa's 'Willie The Pimp'. The track got released on the album "Blue Whale" later that year.
Late 1969 / early 1970, Aynsley Dunbar joined Frank Zappa's band. He recorded and toured with Zappa from 1970 until the end of 1971.
Since then, Aynsley Dunbar performed and recorded with David Bowie, Journey, Jefferson Starship, Whitesnake, and lots of others.

"Mutiny" is Aynsley Dunbar's latest release. It's a nice blues album and contains a lot of co-written compositions from throughout Dunbar's career, as well as some nice suprises. One of these is the excellent 'For What It's Worth' that we all know from the Buffalo Springfield. The other one is a bluesy rendition of Frank Zappa's 'Chunga's Revenge'.