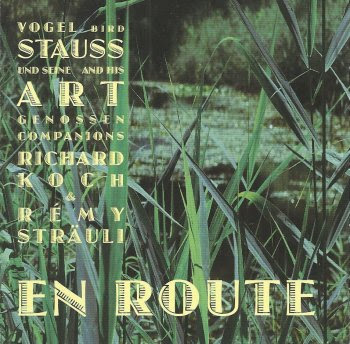 About three weeks ago, Markus Stauss' Fazzul Music label released a new (and excellent) Zauss album. The Zauss project has Markus collaborating with guitar player Francesco Zago. The album is called "Diafonia Leitmotiv Waves" and it's the fourth Zauss album to date. You definitely need to check it out.

But there's more, as the Fazzul record label lets us become acquainted with Bird Stauss and his Art Companions (or Vogel Stauss und seine Art Genossen as they're called in the German language), the Art Companions being Richard Koch on trumpet and Rémy Sträuli on drums and weird background keyboards noises.
"En Route" sounds very fresh and open. Composed, and yet with a lot of space for improvisations.
As Markus Stauss added : "(it sounds) almost 'happy' compared to other Fazzul productions."