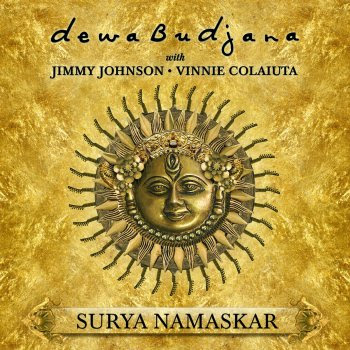 Indonesian guitar player Dewa Budjana is back with a beautiful album. "Surya Namaskar" offers a great set of melodic jazz/rock/fusion tunes.
The album got recorded in January and October of 2013 and features, besides the impressive Jimmy Johnson, the incredible Vinnie Colaiuta on drums.
What a trio. The perfect line-up.
Adding extra spices to the album, the first track, 'Fifty', features Gary Husband on synth, while track number 5, entitled 'Kalingga', presents Kang Pupung and Kang Iya on respectively tarawangsa (Sundanese violin) and kacapi (Sundanese harp). And there's some electric sitar in there as well. Beautiful !!
Furthermore, track number 6, 'Campuhan Hill', has Michael Landau playing the acoustic guitar solos.

In the liner notes of "Surya Namaskar" (meaning 'Salute To The Sun' and immediately explaining the beautiful cover), Dewa Budjana explains to John Kelman that he changed the sound of his guitar, adding a bit of fuzz and distortion to his tone. This is clearly audible. The result is a more powerful and energectic sound.
One of the most impressive tracks on the album is 'Capistrano Road', a composition that Dewa Budjana wrote after meeting Alan Holdsworth. An impressive tribute.

In all, "Suya Namaskar is an impressive album. Definitely one that you need to check out.
It's Dewa Budjana's third released on Leonardo Pavkovik's excellent MoonJune Records label.
www.moonjune.com