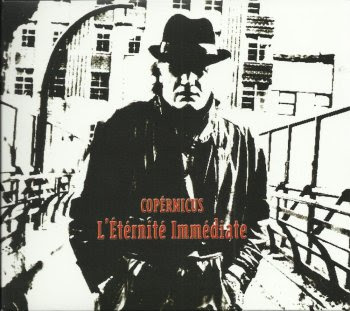 Englert and Higgs received the Nobel prize for physics earlier this month for their research on the boson particle.
Poet, visionary, philosopher and recording artist Copernicus will be glad to hear that the very essence of matter is getting all this attention.

Copernicus claims that nothing exists.
On a subatomic level, nothing can stay the same from one moment to the next, therefore nothing can exist. We are all living an illusion.

Originally released in the English language in 2001, "Immediate Eternity" is getting a French re-issue on Nevermore / Moonjune Records.
Copernicus put french vocals (spoken word) on the already recorded (improvised) music.

Here's a track from the original (English) release