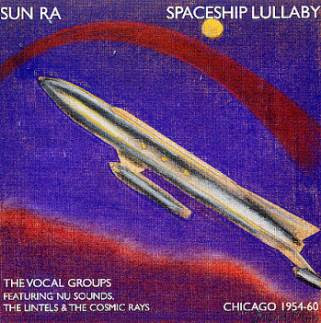 When my friend Danny played me a Sun Ra album a couple of years ago, I was a bit blown away. It was too far out for my taste (and take it from me, I'm used to listening to some bizarre music every once in a while).
I started listening to Sun Ra and his Arkestra occasionally, and slowly got into it.
The thing what really did it for me was seeing a documentary on Ra (which I got from Pete Brunelli - thanx again), AND seeing the Arkestra perform live in Tilburg last year.
The Arkestra played six nights in one week, and went from the 40's big band tunes (Ellington and such) to the early Sun Ra compositions, to the later free jazz (space jazz) pieces, and eventually to Marshall Allen's freaky digital saxophone solos.
It was like taking a Sun Ra masterclass. I got a chronological journey through Sun Ra's career. It made me understand how the music had evolved. Taking smaller steps.

And that's exactly the reason why I tell people that if they want to check out the music of Sun Ra, they should start with some of his early stuff.
Keep in mind however, that the year of release does not mean a thing when you talk about Sun Ra.

That said, here's "Spaceship Lullaby". Released in 2003 in the Unheard Music Series from the Atavistic label, this album takes a look at the mysterious Sun Ra years from 1954 to 1960. It was around that time (1952 to be exact) that Herman 'Sonny' Blount adopted the name Sun Ra.

It was about the same time, that Sun Ra started working with vocal groups. "Spaceship Lullaby" presents sessions by the Nu Sounds, The Lintels, and by The Cosmic Rays.
Quite poppy, and even a bit corny, they take on 'Stranger In Paradise', Just One Of Those Things', 'Nice Work If You Can Get It', ...
I love the part where The Cosmic Rays part kicks in. The first couple of tracks are the vocal ensemble plus drums and piano, but the last two are with The Arkestra.

Quality is far from perfect as an old rehearsal tape was used, but "Spaceship Lullaby" will give you an idea of what Sun Ra's doo-wop projects were about.