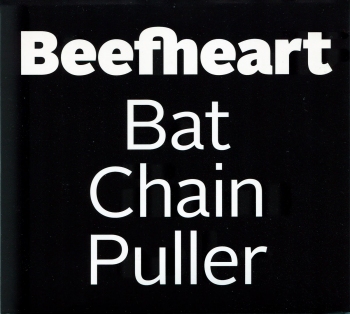 Captain Beefheart & His Magic Band recorded"Bat Chain Puller" in 1976, shortly after a European tour. Both Bruce Fowler and Elliot Ingber left the Magic Band, so replacements had to be made and John French and Denny Walley were joined by Jeff Moris Tepper who would take on the guitar duties (he was a former neighbour of Don Van Vliet) and John Thomas who would be playing keyboard bass.
Unfortunately, shortly after the recording, label owners Frank Zappa and Herb Cohen got into a dispute and Cohen had all of Zappa's equipment and archived recordings confiscated, including the Bat Chain Puller master tape.
Zappa and Cohen went to court and Zappa did win the case. In 1982. So the Bat Chain Puller master tapes came back to surface some six years after the recording session.
In the meantime, Beefheart had already re-recorded most of the material with a different band for "Shiny Beast". The result was that the original master recording got stored in the Zappa Vault.

However, shortly after the recording of BCP a demo tape of the album had been sent to a couple of journalists for review purposes. Copies of the tape made it to the fans, and eventually bootlegs of the album turned up as well.

Last month, the Zappa Family Trust released "Bat Chain Puller" on CD. The original album plus some bonus tracks.
I've always had a soft spot for "Shiny Beast" and for the original "Bat Chain Puller" recordings.
Listening to BCP only makes these feelings stronger.
It's a joy to hear the original recordings in a superb audio quality.
I have been playing BCP for three days in a row, and all that I can say is that it has become my favorite Beefheart album.