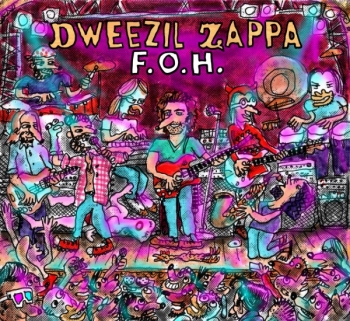 Dweezil Zappa's "Front Of House" album arrived last week. If I understand it correctly,"Front Of House" means that the recordings on this discs are from the mixing board. No multi-channel tweeking.
"F.O.H." includes material from the Zappa Plays Zappa tours from 2007 untill 2011. I know that a lot of fans are quite frustrated by the recent ZFT clean-up on YouTube, but that does not make this a less good album. Actually, it's pretty impressive. I like the sound of the front-of-house-mix, and the performance of the band is excellent.
It's a good-looking package as well: a 2CD fold-out set, with beautiful Cal Schenkel artwork.
The only minor thing is the price, which Dweezil addresses in the liner notes saying that illegal downloads makes putting out CDs less profitable.