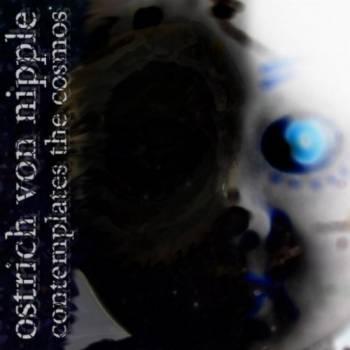 You might remember me being overwhelmed by Ostrich Von Nipple's "Contemplates The Cosmos" a little while ago. So I thought I'd throw OVN some questions.

UniMuta : Dear OVN, I really enjoy your latest album, and I was wondering if I would be able to persuade you to answer a couple of questions.
"Ostrich Von Nipple Contemplates The Cosmos" sounds very adventurous and out of this world. I imagine that the entire album tells one story. Could you tell us in a few lines what the story is about?

Ostrich Von Nipple : Well, thank you... The record is actually made up of smaller (and at times deeply personal) stories from a lyrical and individual song perspective. However, the entire album structure has been compiled in a manner that implies a "story" from a musical perspective. The implied story is intentionally obscured, but it does involve a "journey" of sorts. It is my hope that the "journey" is unique to the listener as the music is intended to suggest certain ideas, rather than dictate them.

UniMuta : It's obvious that you are influenced by The Residents and by Snakefinger. Furthermore, one of the contributors to the album is (current Resident) Nolan Cook (Who fits in perfectly, by the way.) How did his contribution come about?

Ostrich Von Nipple : I have been a fan of Nolan Cook's work since around 1999 or 2000. A few years back I stumbled across some of NC's solo work on the web. I got in contact with him to see if this music was for sale or somehow available for public consumption. He responded to inform me that it was not available at that time, and our correspondence began. He had mentioned a desire to experiment with virtual recording sessions. I had coincidently just finished a track and had been thinking to myself "this needs something like Nolan Cook-ish guitar on it...." We began to discuss the technical aspects involved in accomplishing this type of collaboration and I soon sent him the first track - "Grumpy Crustaceans". We have been working in a similar fashion since. Ironically, some of this solo work I was initially inquiring about has recently become available for download and can be purchased here: http://nolancook.bandcamp.com/album/from-the-nc-lab

UniMuta : Could you tell me a little bit about the other guests on the album? And how they did contribute? Did you make some sort of basic track on which everyone added bits and pieces, or did you have mutual recording sessions?

Ostrich Von Nipple : I typically bring a piece to near completion before I collaborate with guests and record their interpretation, or simply what the song may require. We may be in the same room as this happens or work in a virtual manner. Viola da Jarvis, Chief Savage Joe and r0b0t are all friends/colleagues from the Atlanta, GA group "The Goons of Waxing-Gibbous" (as well as various other bands). Viola plays cello on one song and contributes vocals to another. The Chief plays drums/percussion on a few tunes. R0b0t plays guitar and electronics on a few tracks as well. (Chief and b0t also help out on the "pottymouth" chant.) Robot is also a crucial part of late production work and completes all the mastering. Havyn the Hatchling contributes vocals to one tune, as well as all sounds and voices on another. The Hatchling also provides inspiration and feedback for many other pieces as well. It is important for me to note that all guest artists' contributions extend well beyond actually playing and recording and without them this music would not be available for anyone else to hear.

UniMuta : You have a MySpace site ( http://www.myspace.com/ostrichvonnipple ), but otherwise, not much is to be found about Ostrich Von Nipple on the internet. Is this your first musical project / first album?

Ostrich Von Nipple : I have recently created a page on Facebook ( http://www.facebook.com/#!/pages/Ostrich-Von-Nipple/188082897903468 ) and plan to add more information there in the future. The Cosmos record is actually the second OVN attempt, but it is the first official release. The first, self-titled, CD was handmade in very small quantities - a few of them were sold and a few were given out to friends. A couple of the songs are still up on the ole' MySpace page. There have also been a couple of promotional CD's which contain existing, alternate and unreleased material.

UniMuta : What are your future plans? Was "OVN Contemplates The Cosmos" a one-time project? Will there be concerts, or will there be a sequel? What else can we expect?

Ostrich Von Nipple : Immediate plans are to continue working away. We have been hard at work on a new full length record for quite some time now (expect to hear many of the same guest artists). Significant progress has been made, but these things take time. Although the topic of playing live has come up among the "band" there is nothing planned as of yet. The possibility exists; however, conditions would have to be just right. Also in work is an EP length recording and I have been discussing a new video for a Cosmos track with director Shitty Bedford.

UniMuta : I'm already looking forward to it. Thank you, and good luck with the new album.

Ostrich Von Nipple Contemplates The Cosmos is available from iTunes, CDBaby, Amazon and various other places... Be sure to check it out.