CANDY ZAPPA - TO BE PERFECTLY FRANK 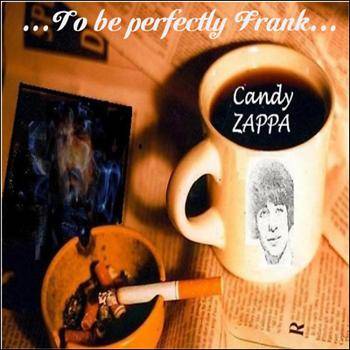 The first time that I went to the Zappanale Festival was in 2002. It was an overwhelming experience and I've been going back to Bad Doberan every year.
It was in 2002, that the Arf Society inaugurated the Zappa statue in Bad Doberan and they celebrated it with an enormous cast of musicians: Thana and Bob Harris, Mike Keneally, Ed Palermo, Don Preston, Ike Willis, Napoleon Murphy Brock, Jimmy Carl Black, Scott Thunes, Bunk Gardner, Roy Estrada,... and Candy and Bob Zappa (and not Carl Zappa as I stated earlier...).

And now, Candy's back with her first solo release.
On "To Be Perfectly Frank" the music alternates with audio comments and statements by Frank Zappa that were taken from various sources like interviews, radio and tv-shows. The music sounds good. About half of the pieces that were recorded are Frank Zappa compositions. It sounds like quite a few were recorded live (maybe even at the 2002 Zappanale festival) and I think I can distinguish the Ed Palermo Big Band, Ike Willis and even Don Preston. It's too bad that there isn't any info on the recording dates & on the participating musicians.

Some of the tracks on "To Be Perfectly Frank" can also be found on the "Neonfire" album. Still, this disc is a nice listen.