THE MUFFIN MEN - JUST ANOTHER BAND FROM L4 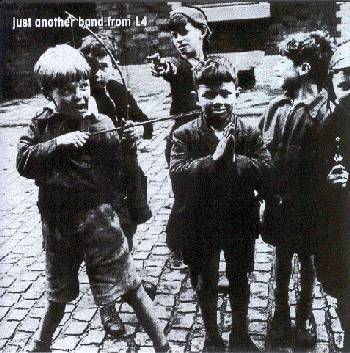 I first heard about The Muffin Men at one of Guus' Zappadays in Eindhoven in what must have been 1991. I don't recall where I first saw them. Might have been Eindhoven. Or maybe it was at the Ghent Festival.
I did catch them quite a number of times, actually, and saw some great concerts. For me personally, the highlight was the gig in 'De Wollewei' in Turnhout, with special guest Ike Willis. A close second would be a concert, any concert, that The Muffin Men did with the late Jimmy Carl Black. Thinking about Jimmy singing Van Vliet's 'Plastic Factory' still gives me goosebumps.

According to the liner notes of "Just Another Band From L4", it was Jimmy Carl Black who kept telling the band that they should record an album with their own material. The result, "Just Another Band From L4" (L4 is an old district of Liverpool, the band's home town), sounds pretty good. One can tell that the band listened to a lot of 70s British progressive rock music in their younger years.

Highlights are the Jimmy Carl Black tribute 'Jimmy Oh Jimmy', a beautiful doo-wop tune, and the live tunes that were recorded at Zappanale and that feature Ray White, Robert Martin, Denny Walley, not forgetting Ben Watson!

A tip to the hat for The Muffin Men who have been keeping FZ's music alive for the last twenty years and who made another fine record. Or as we say over here "¡Viva Los Hombres De Galletas!" (we don't actually speak spanish, but "Lang Leve De Koffiekoeken Mannen!" just doesn't sound that good.)

The perfect addition to your Muffin Men CD collection!